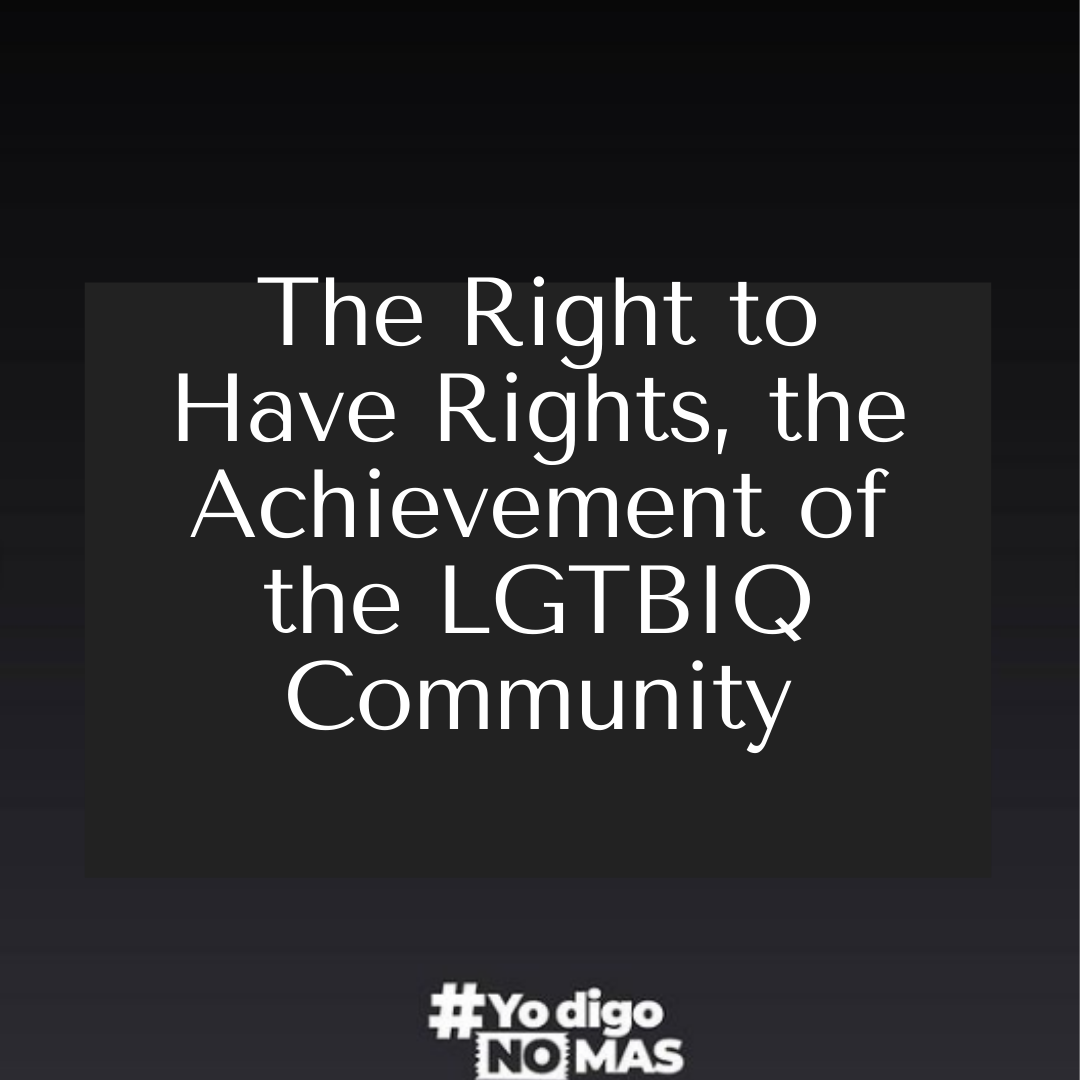 The Right to Have Rights, the Achievement of the LGBTQ Community

In 1969, a bar in New York made history; the gay people of the city decided to break the silence and never go back to it. In the early morning of June 28th at Stonewall Inn, a bar in Greenwich Village, the liberation movement for the rights of the LGBTQ Community came to life after the indignation caused by the police raid that took place there.

During those times, there were few places that allowed people to have the freedom to express attraction for someone of the same sex, and in the midst of a discriminatory and unjust society, police aggression towards those who broke the heterosexual norm was justified. But this community got tired and said No More. They took to the streets to march, make themselves heard and demand their rights.

The normalization of homophobia did not allow to see that thousands of people were being socially condemned to the repression of their affections, to a life full of dissatisfaction, anguish, and unhappiness. Choosing whom to love implied for many to be labeled as sick, or even possessed by the devil. The collective discourse of segregation was so convinced that this was the way forward that in 1970, Spain passed the Law of Dangerousness and Social Rehabilitation, which treated homosexuals as vagrants or thugs, sentencing them to up to 5 years in prison.

During the 1960’s through the 1990’s, social movements were gaining more and more strength since those who felt oppressed wanted access to the opportunities and rights they felt were being taken away from them.

The liberation movement of the LGTBI Community was not an exception. In 1972 a legislation was created in Sweden to allow trans people to legally change their gender, financed by the state with free treatment. This right in today’s reality still seems distant for many countries.

The openness shown by many countries towards inclusion made others strengthen the social fear of freedom of choice and tightened their regulations, taking refuge in safeguarding religious or traditional beliefs to exercise the absurd “right” to discrimination. Thus, in 1988, the United Arab Emirates approved the death penalty for homosexuals, proving to the world that violence is the form of government they prefer to exercise. Yemen, Sudan, Mauritania, Nigeria, and Somalia are also part of the list of countries that still to this day prefer to feed the ranks of the dead in cemeteries than to recognize the affective choice of their citizens.

For an Affective Freedom

In 1994, Canada tried to repair the injustice it had committed against homosexual people and offered refuge to all those who were fleeing their countries due to sexual discrimination. In 1990, the WHO also tried to remedy the stigmatization caused to the LGBTQ population and removed homosexuality from the list of mental illnesses, a step that scientifically discredited behavioral treatments for sexual reorientation.

Currently, we know of cases such as the Chechen Republic, where several concentration camps were found in which homosexuals were held and tortured; this news was known in 2017. For minorities, it has been difficult to travel the road to emancipation and the guarantee of their rights, but it is important to remember that until less than two centuries ago, slavery was considered just another commercial transaction, without any social sanction for using human beings as merchandise for sale. Understanding that this type of behavior was socially accepted allows us to look back and maintain hope for the processes of freedom that have been achieved in the last two centuries.

There are still many rights to be secured, and there are countries that preserve traditions that denigrate human beings, but now at least discrimination is collectively sanctioned and voices are increasingly raised to ensure that injustices do not go unpunished.

You can be part of the change, join this movement on behalf of yourself or hundreds of victims who have not been able to find their voice to speak out against this scourge.

Find the multiple options we have to get involved with the movement and make your voice heard.

How to build a healthy couple relationship?

Couple relationships represent an essential part of people's lives, from adolescence to old age.  Although some of ...

How to know if you suffer from Body Dysmorphia?

Do you know what Body Dysmorphia is? Sometimes, when we look at ourselves in a mirror, we ...

Yo digo NO MÁS

Just for this month